Thursday was the start of the grand adventure, a beginning of something, “The Search”. I started my journey in the best of places, Denver Colorado, and made my way down to the beautiful city of Colorado Springs. There were so many things to do and places to eat in the city, but I opted for an evening in the Garden of the Gods where I was met with the beauty of the red rocks cascading throw the park. I drove around a bit and found a quiet place to sit and reflect on my decision for this epic search. I laughed a little thinking of the life I’ve made for myself and smiled at the opportunity before me. 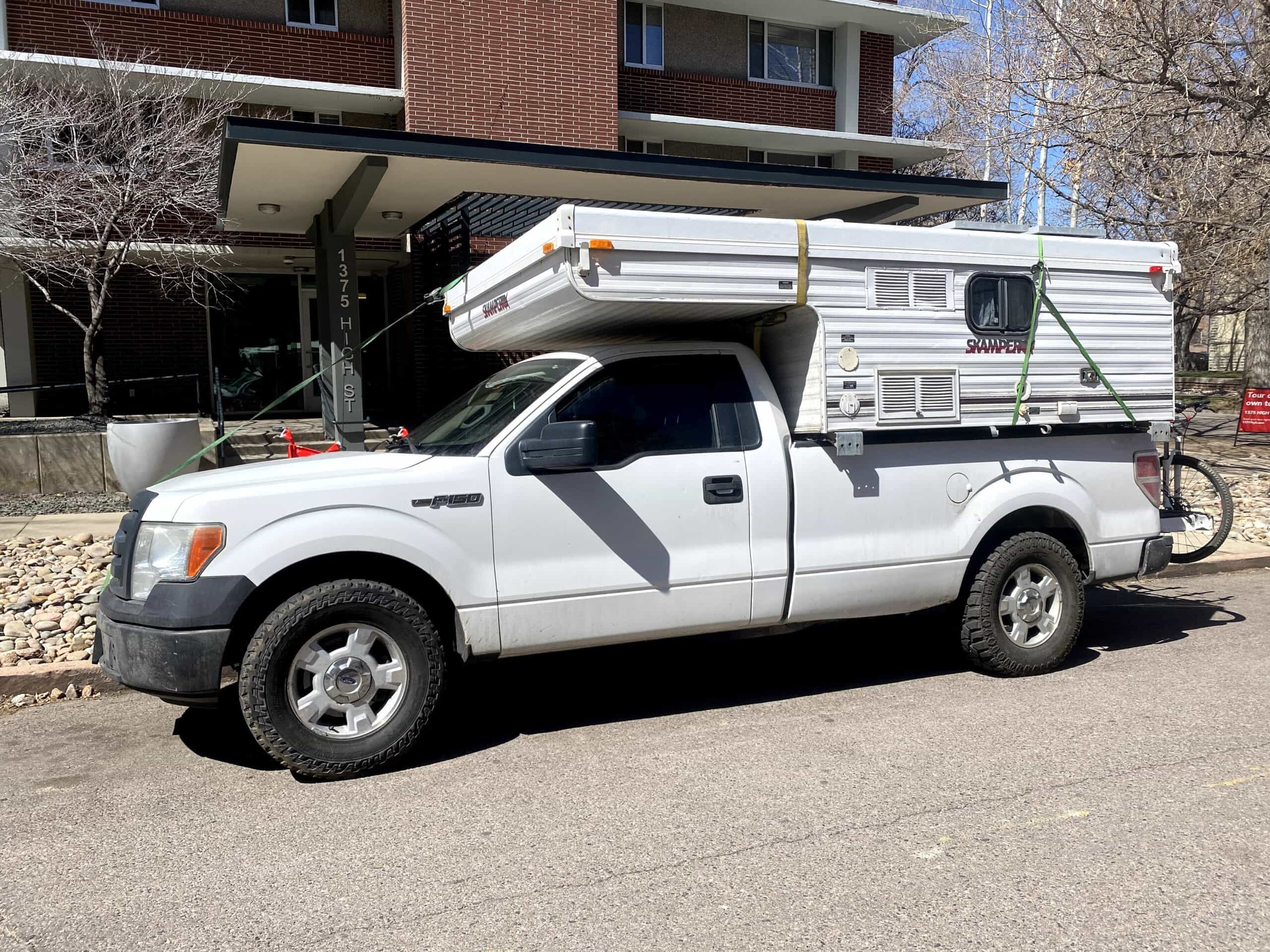 Later the next morning, the Manitou Incline was on my mind. As I jogged my way up the nearly 2600’ incline, I was met with many friendly chats and a staggering view. Running down the side of the mountain was a good choice, with sharp switchbacks and rocks to jump. Remember to sign up online to hike the incline, they may be filled up for the day you intend to go. 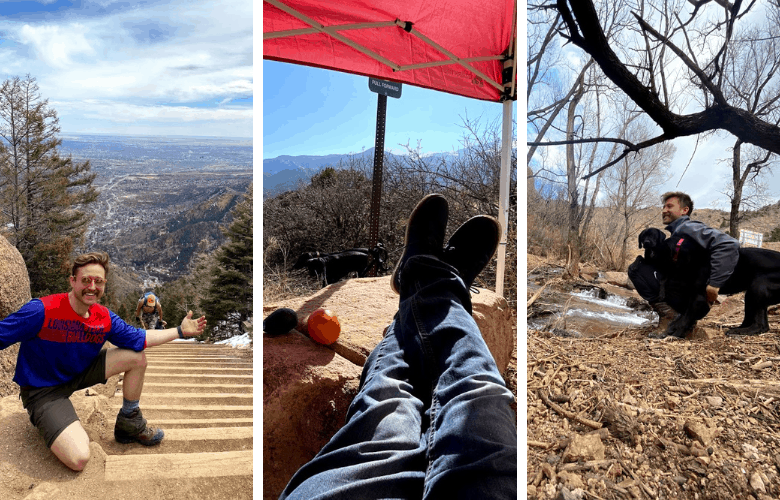 Once I had my fill of curry and rice I took myself, the puppers, and dalilah (my home for the next few months) to Cañon City, more specifically the oil wells campground on BLM land. The air was warm and the land was mine. I let the dogs adventure and sat down with tea for several hours watching the sunset through the Rockies.

The next morning the “Red Canyon Park”, “Temple Canyon Park”, and “Dinosaur Fossil Park” were on my to-do list. I found friends on my first excursion in the red canyons and rock climbed the massively vertical 110’ wall in “the gym” near “the bank” campground. That night, after a summit hike in the canyon, I found a warm fire and a cheerful group of boondockers; sharing stories of adventure, along with plenty of beer!

Waking up in the warm sun was much needed. I drove to the royal gorge bridge the next morning. If you go after 4pm the tickets are $11 cheaper (the bridge closes at 5:30). The several thousand foot drop down to the royal gorge river was something to behold, my decision to shell out a few bucks was well worth the investment. 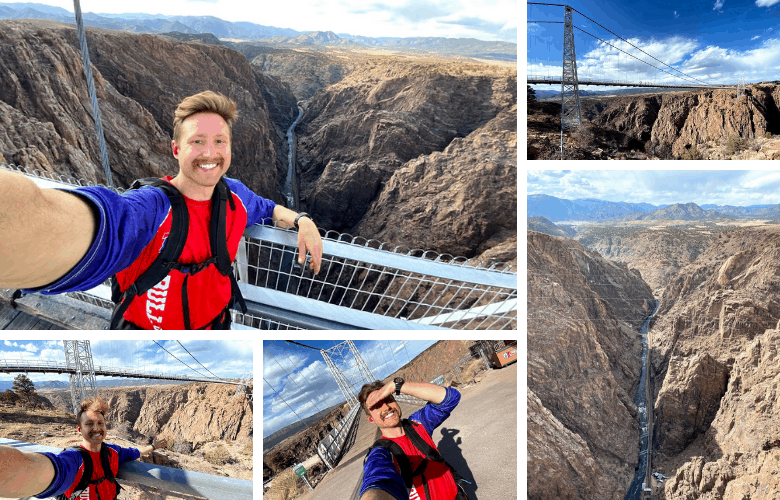 Buena Vista was next on the list. I found a great camping spot just west of town, an oasis of sunshine and seclusion. The road to get there was extremely rough and a truck with high clearance (and good tires) was required. The dogs and I saw deer and other small wildlife that added some adventure to the snowy landscape. 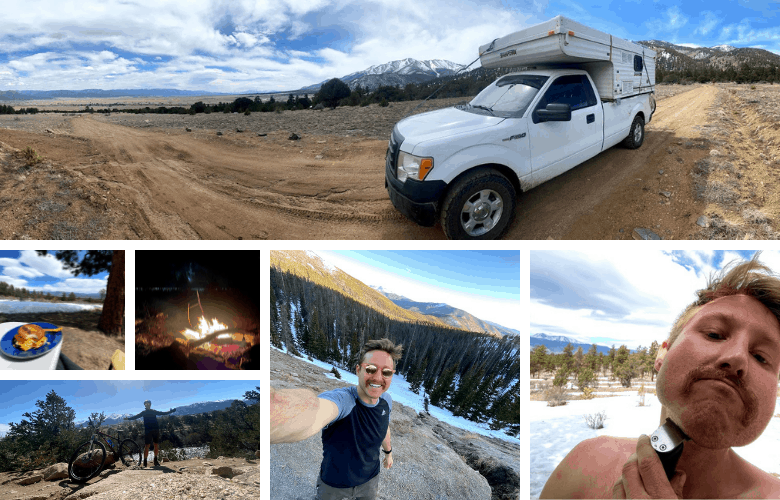 I didn’t know this going into the town, but there are some great mountain biking trails just east of town that offer a breathtaking view of the city and the 360° of surrounding mountain tops. The MTB trail was blue/black and my hard-tail trek was more than enough for a great time.

After Buena Vista, I had my eye on another epic mtb trail, Hartman Rocks, in Gunnison. The 12.4 mile trail was rocky, snowy, and above all exhilarating to say the least. I saw the top and contemplated doing the trail one last time, and I did! Remember to call ahead of you plan to camp at Hartman Rocks; the gate was closed until April 30th because of the muddy conditions.

Assuming my coldest nights were ahead of me was correct. Crested butte got down to 10° the first night. The hiking in that town was above all the most beautiful in Colorado! I spent most of my time in the snow and chatting with the locals who insisted I “not tell anyone about this place”! It is truly a hidden gem. 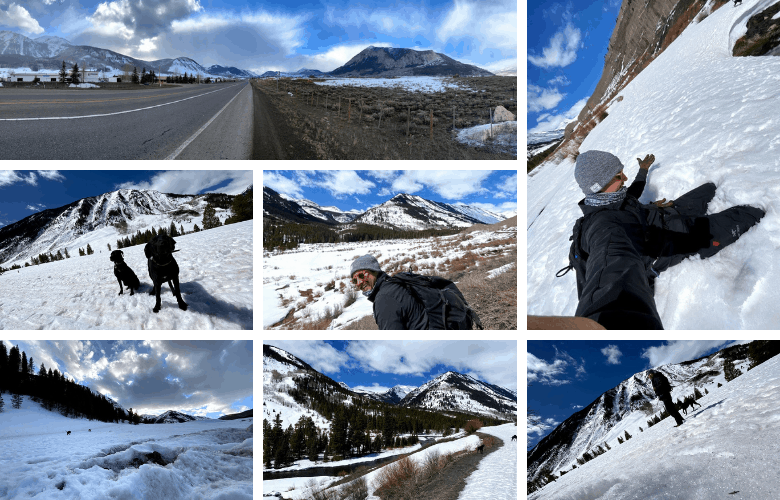 A few nights in crested butte and I was off to meet friends in Glenwood Springs, but first I stopped and admired the “Blue Mesa” area just north of Salida, Colorado. I walked the frozen lake with the puppers and threw snowballs for what seemed to be hours before it was time to head north. 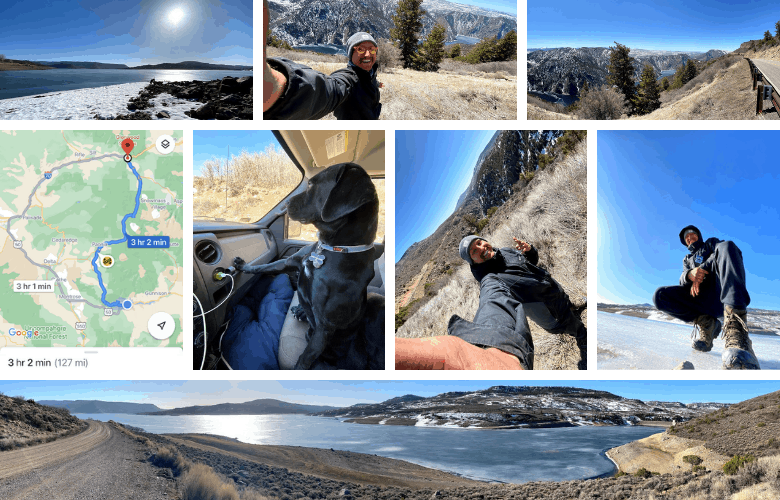 Along the way (I took the long way straight through the mountains) to glenwood springs, I stopped at a few local farms for fresh eggs and produce, which has been an exciting part of my trip. 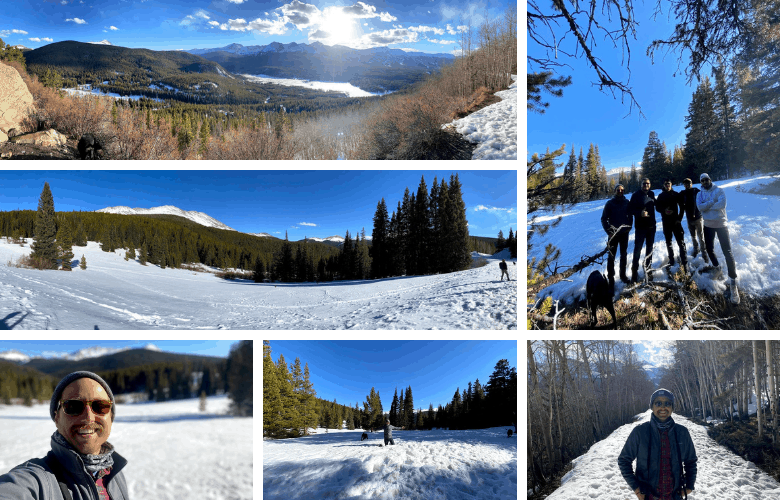 Once I arrived to Iron Mountain Hot Springs, I did a quick workout with my resistance bands waiting for my friends to arrive. We soaked in the “Healing Springs” for many hours and laughed and talked about everything from jovial topics to serious ones. We stayed out that whole night on a night-hike alone the river.

The next few days were spent in the Frisco area. Breckinridge has skiing, shopping, restaurants, and all the hiking your heart desires. We made a fire atop a summit in breck, and enjoyed backcountry skiing. I wanted to stay in breck for a few days, there I took many hikes and sat in awe of the beauty.

After a few nights in the coldest weather I’ve slept in, I made it to the ski destination where I would spend many days in the snow, Loveland Pass. We got 8” of snow a night and 100% of the skiing I set out to do. The powder was perfect. I met a few more characters at the trailheads which I was staying for the nights in Loveland. It made me think about how much I don’t know and how many great things I have ahead of me on this journey and beyond. 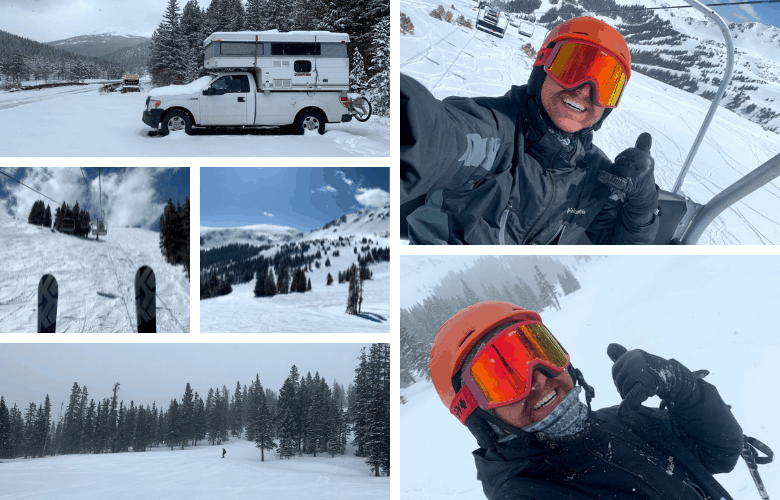 A week and a plethora of skiing tricks later, I was off to again stay in the beautiful city of glenwood springs. I found views, hikes, stalagmite naturally forming between rocks on my several hikes. I also came across locals who shared stories of their travels and warnings of the local mountain lions that roam those parts! I never did see that mountain lion, but I found the reason they live there, and the view alone was well worth the risk.

I was off the next morning for the city of Grand Junction. The nice quiet Sunday drive was about 1.5 hours and full of sunshine and mountains. In the city I was able to get my phone fixed (the iPhone went into a boot loop and would not restore despite my best efforts of downloading the software with the help of a local McDonald’s WiFi). It had been almost a week since my phone died and I was a welcomed release from technology and a focused time on nature. 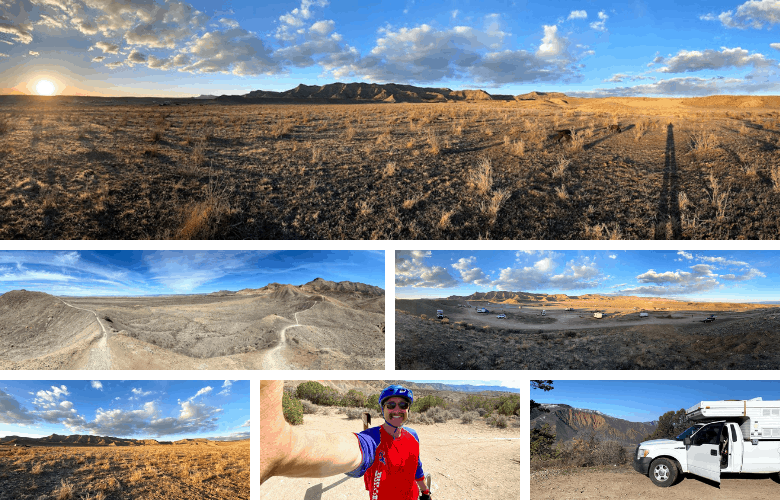 Driving through Grand Junction and off to the mtb capital known as the town of Fruita was next on the list. I found open land, scenic trails, and rows of never-ending mountain tops. This BLM campground was one of the coolest places I’ve camped, with plenty of adventure for those who seek it! Sleeping Bag Draft Collars – Everything You Need To Know This site uses Akismet to reduce spam. Learn how your comment data is processed.

Back to top button
Close